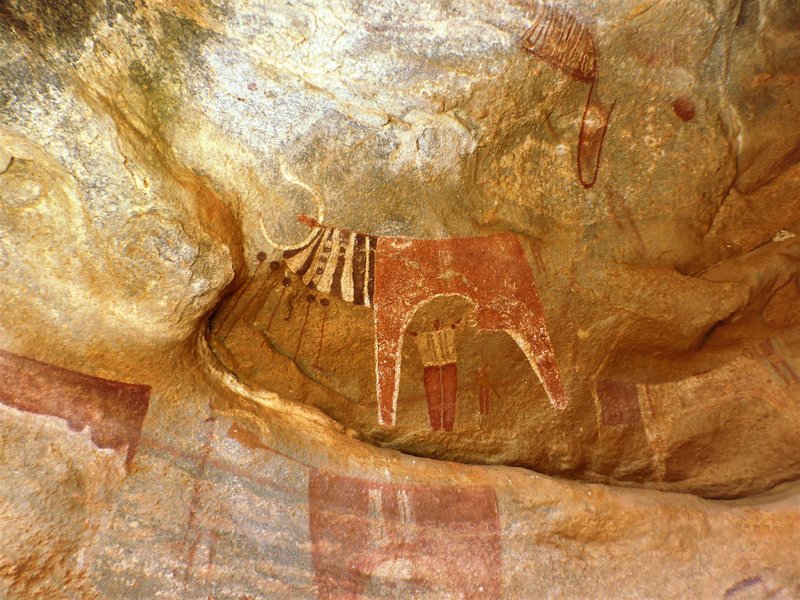 In 2014 I visited Somaliland. Since 1991 the Republic of Somaliland, the northern part of Somalia, is independent. Somaliland is a country that officially not exists, because the democratic government is not recognised by the international community.

In Somaliland are the most incredible rockpaintings of the African continent at about 120 locations. On my way from Hargeisa to Berbera I visited the most well known in Las Geel, studied by French archaeologists in 2003. North from Hargeisa I visited Dhagax Kure in a half day trip. Further I visited besides the capital Hargeisa, the harbour town Berbera and the second largest town of the country Burao. 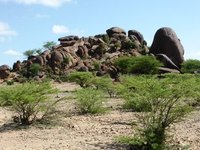 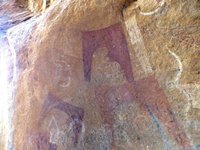 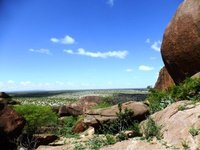 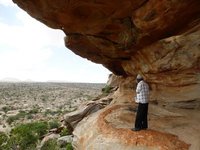 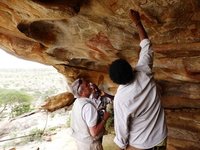 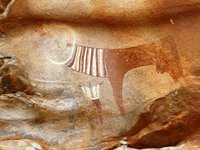 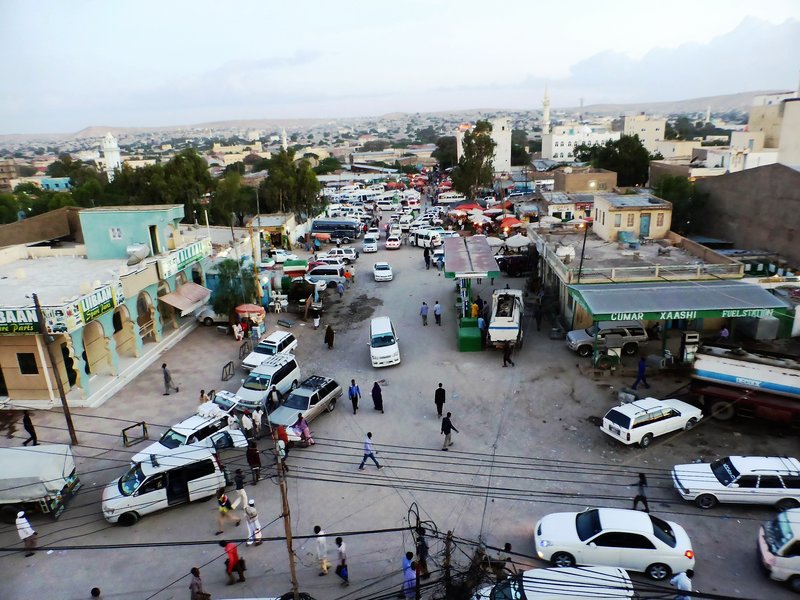 Hargeisa is the capital of the self-declared republic of Somaliland, Internationally recognized as an autonomous region of Somalia. The charm of the city is its relaxed and friendly atmosphere and the colourfully painted shops showing what you can buy. Hargeisa is a town in transition, vivid and bustling by the huge amount of micro businesses. A mix of traditional and modern buildings. Hargeisa, with 800,000 inhabitants, is an easygoing, peaceful and friendly city. In recent years, it has been one of the safest places in Somalia.

There are not real touristy must-see places, sights or activities in Hargeisa. The citycentre area is a interesting place to walk around and experience the African life. I liked to watch the streetlife and the colourfully painted shops. The local people are very friendly. They mostly greet you or start a talk with you. In town you can walk freely, but if you leave the city, you need to take a government security guard with you, the so-called "SPU" or arrange a letter that it is in your case not needed. 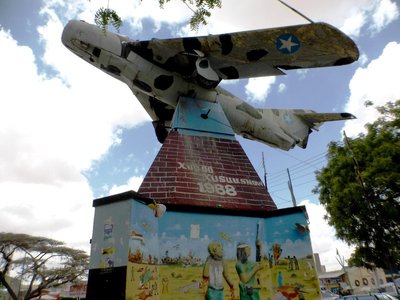 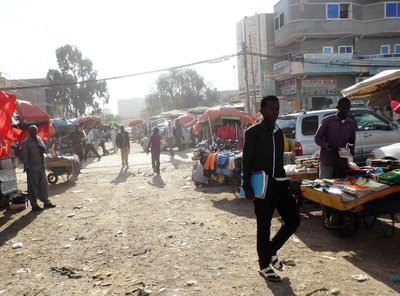 In the centre of town you can not miss the war memorial. This Hargeisa Civil War Memorial, which consists of a Airforce MIG fighter jet is mounted at a base. The jet crashed in the civil war during the regular aerial bombardments of the town by Somalian dictator Siyaad Barre from 1988 to1990. About 50.000 people of Somaliland were killed. The basement of the monument is decorated with murals depicting the hardships of the civil war. 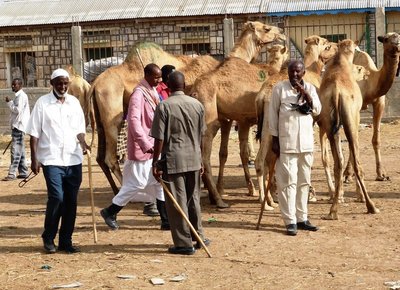 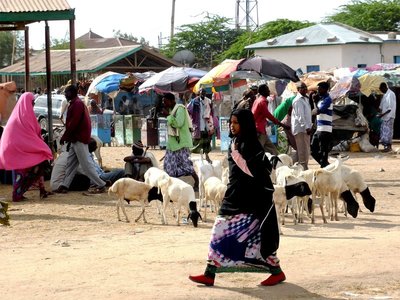 We visited the livestock market in the morning. The best time is before 10am. The market is also known as the camel market. In Somaliland are many camels everywhere in the country. It is a bustling market with camels, goats and sheep. We walked between the huge amount of camels. I like camels, I did some camel trips in the desert. Making pictures was no problem , but some camel owners were curious why we made close-up pics of the camels. It was not a pretty idea that many camels are sold not to go back to the desert, but for export to Saudi Arabia for meat consumption. After we had visited the area with camels we walked to other parts of the market. The camel section of the market was business for men. At the sheep and goat section there were more women around. In Somaliland there are special fat-tailed sheep with a black head. You see them everywhere in the country. 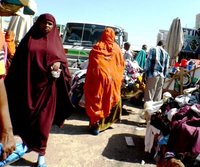 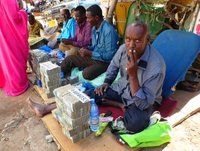 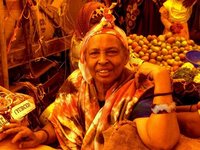 Our hotel was close to the central market area. So it was easy to go for a walk at the market. It is a labyrinth of open and covered stalls. All you can imagine, mention it and you can buy it here. We saw colourful cloth for female dresses, all kind of clothes, shoes, kitchen utensiles, vegetables, meat, spices, herbs, electronics. We also went to the goldmarket close to the money market. We went early morning, strolled many lanes and crosslanes. After some time when it was getting very hot. 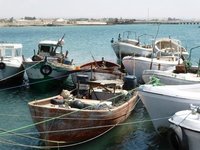 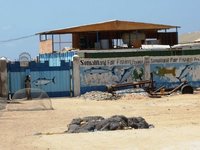 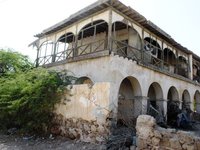 Berbera is a harbour town with about 200.000 inhabitants. Because of its strategic location for the trade route between the Red Sea and India is Berbera a maritime trade centre since the ancient times. Once Berbera town was busy and important. Nowadays has Berbera still the biggest seaport for Somaliland, but it is a no-go area. In the old town I visited the fishing harbour. From here you see the skyline of the seaport west of the town. 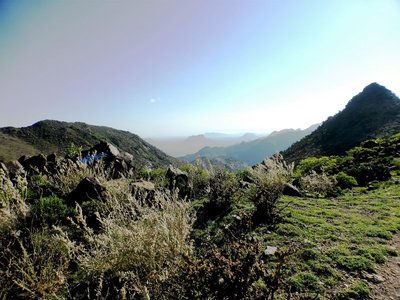 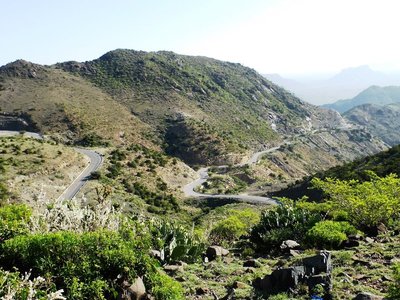 On the way from Berbera to Burao was the most interesting part the Golis escarpment with the Sheikh Pass. It seems to be one of the most dramatic roads in Somaliland. At the village of Hudisa at the base of the Golis Range the road climbs some 700m over a 10km. The views at the mountains and at the plains below are breathtaking. We made several stops to enjoy the landscape and to make pictures. 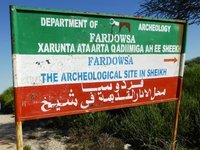 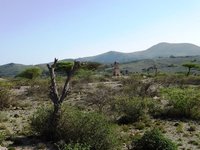 Sheikh is a small town of about 33.000 inhabitants on a plateau at 1470m between Berbera and Burao. Because the town is located on a plateau, the temperature is cooler than Berbera. Sheikh can be very green after the rains. There is not much to see in Sheikh. When we approached Sheikh we saw a lot of students along the road. At short distance of the town is the Sheikh secondary school. We visited the area of the old colonial British houses. It's surreal to see only some free standing chimneys. Some students joined us and liked to talk english with us. Sheikh is known of its archeological site Ferdusa. There is a sign along the road. We walked into bushes and saw some stones, that's all. The area is still unexcavated. The ruins seem to be the remains of a stone city of about 400 years ago. 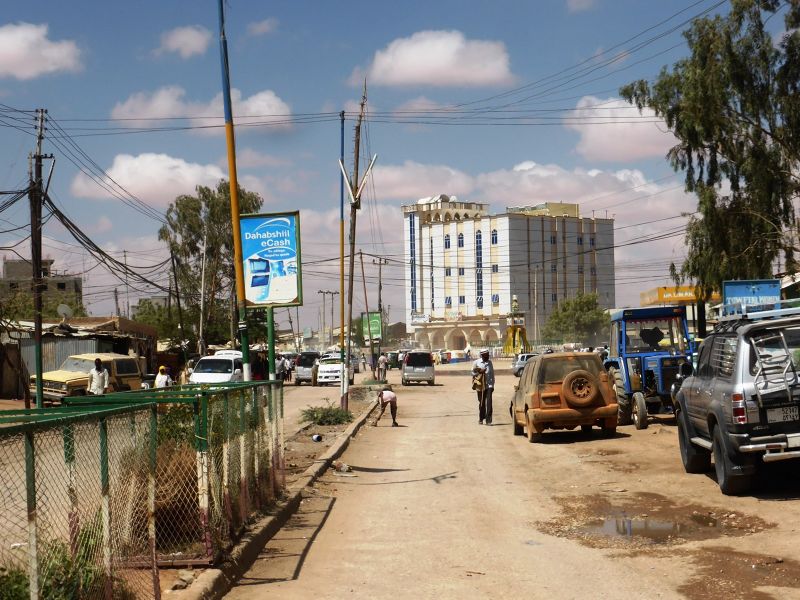 Burao is the second largest city of Somaliland. It is the capital of Togdheer province. The area has between the 300.000 and 400.000 inhabitants. In Burao was the declaration of the unilateral internationally unrecognized declaration of an independent Somaliland on 18 May 1991. Like many other cities in the northern part of Somalia, Burao has been rebuilt with limited aid from outside since the outbreak of the civil war. The town has grown by the investment of the Somali diaspora and by people from rural areas moving to the city. 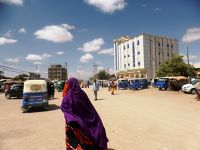 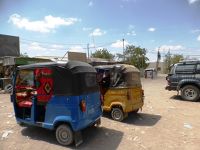 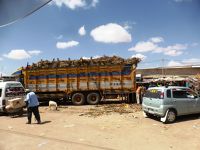 There are no real must-see places in town. We visitied Burao at a day tour from Berbera. We left early from Berbera and had a late breakfast in Burao in the restaurant of Abco Palace Hotel. We visited the market to buy some fresh fruits, drove around a bit to get an impression of the streetlife in a Somali town and headed back to Berbera.